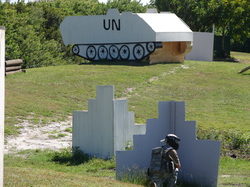 Clearwater Paintball opened last year as part of the Chi Chi Rodriguez sports complex on McMullen-Booth Road. Five different areas on the site allow numerous games to go on at one time so that groups such as corporate gatherings and birthday parties can play by themselves.﻿


CLEARWATER — John Steinmeier has found a way to have fun, stay fit and bond with his 13-year-old son, Ryan. He even gets a little "painting" done, too.

On weekends, the two often head for Clearwater Paintball, part of the Chi Chi Rodriguez sports complex at 2987 McMullen-Booth Road, where they play mock military-style games.
"It's something we have a common interest in and it's a hell of a workout," said Steinmeier, 39 . "When you run from bunker to bunker, carrying all your gear for a few hours, yeah, you've gotten your exercise."

Clearwater Paintball opened in October on a 3-acre, gently rolling site. The battlefield features concrete and wooden "bunkers," a "U.N. tank" and covered picnic tables.
Paintball players, some dressed in military fatigues, team up to eliminate the enemy. Not with a bang or a whimper, but with a splat of paint propelled by compressed air. (Don't worry moms, the paint washes out in the laundry.)

John Gross, 53, of Largo owns Clearwater Paintball and says he started playing the extreme sport in its infancy in the 1980s. Paintball is said to have its origins in the cattle and forestry industries when balls of paint were shot from a distance to mark cows and trees.

Gross said paintball is all about the exhilaration it delivers.
"I don't care if you're a man, woman, child or 65-year-old grandma, you're going to get an adrenaline rush," Gross said. "At some point when you're playing, you lose your sense of hearing, get tunnel vision and time slows down."
This is a cool thing, he says. "Then when the game is over, everybody sits down and shares their war stories over pizza.

"Does it hurt?
"It's kind of like popping towels," Gross said. "Every once in a while it smarts."
Players always wear masks to protect their faces and there is a safety briefing before play.
Gross said the game appeals mainly to males, especially those interested in the military and law enforcement, but about 10 to 15 percent of players are female.
"It's something everybody, young and old, can play and have fun at," he said.

The standard rate for players is $10 to use the field plus additional fees for gear and compressed air if players need them. Groups over four can get a $35 per person rate, which includes safety equipment, markers, field fees, and ammo — 500 paintballs the size of gumballs.
The games emphasize teamwork and fun, making them well-suited for birthday parties, school and church fundraisers, bachelor parties and corporate groups, Gross said.

Robert Riffey, 38, of Clearwater said playing paintball and airsoft is like being inside a real life video game.
"It's probably as close as you can get to a real combat situation," he said, "without the actual gunfire.
Reach Terri Bryce Reeves at treeves@tampabay.rr.com   Clearwater Paintball

Robert Riffey, 38, of Clearwater plays airsoft, a game similar to paintball. Riffey said playing airsoft is much like a combat situation without actual gunfire.﻿